This is a re-post of a Blog I did for work, which is posted on the IMAGINiT Building Solutions Blog here.

I had a client point out this issue to me, what they had tried to do was to export a Revit file to BIM 360 Glue, using the NWC option in the “Glue” feature in the BIM 360 Revit Add-in. It was a Revit 2014 model from a 3D view with Revit 2 links loaded. They had set their Navisworks Exporter 2014 to convert linked files.  However after exporting to Glue, none of the links have been exported.

I did some testing and found that like my client said you cannot upload a Revit file with links to Glue using “Glue” in the BIM 360 Revit Add-in using a NWC format and have the links visible. I tested this in 2014, 2015, and 2016 and if would not work in any of them.

While looking for a possible solution in the BIM 360 Glue forum I discovered that this is a known issue for Autodesk.

“Just for clarification, the settings of the NWC Export and the Glue plug-in are independent.  As a quick update, the error you are experiencing is a Revit issue which is currently being addressed.

We understand that this is a critical issue for our Glue customers, the team are doing their best to fix and release an update that solves this issue.  I will certainly post an update in this forum once I receive a time frame as to when this will be resolved.” (Source Link)

The above was posted on Mar. 27th 2015, and as of today there has been no resolution posted.

The work around is to export the file as an NWC from Revit (not using the BIM 360 Add-in) using the export as NWC feature under the application menu. 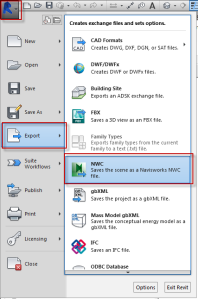 Make sure when you do this that “convert link files” is selected in the Navisworks Exporter for the version of Revit you are using. 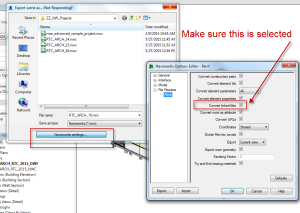 Then you can manually upload the NWC file to your BIM 360 Glue project and the links will then be visible in that version within BIM 360 Glue. 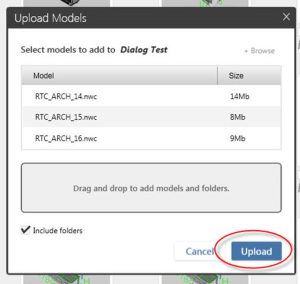 It’s an extra step, but it does work.

Here is a screen shot of what the file looks like when exported using the BIM 360 Add-in for Revit. The two linked files are not part of the model.

Here is a screen shot of the same model that was exported using the NWC export feature under the application mean in Revit. The two linked files are now part of the model, and visible.

Published by The BIMsider

View all posts by The BIMsider

1 thought on “BIM 360 Glue: Issue with linked files when you use the NWC file option in BIM 360 Revit Add-in”

My Tweets
Join 3,915 other subscribers
Follow The BIMsider on WordPress.com

Autodesk, AutoCAD, and Revit are registered trademarks or trademarks of Autodesk, Inc., in the United States and other countries. This site is not sponsored or endorsed by, or affiliated with, Autodesk, Inc. Autodesk® Revit® products are wholly owned by Autodesk. Any reference to Revit, Revit Architecture, Revit MEP or Revit Structure on this site is made acknowledging this ownership. Refer to Autodesk's own web site and product pages for specific trademark and copyright information. Autodesk represents a great many products and every attempt will be made to respect their ownership whenever one of these other products is mentioned on this site.

is a Dynamo user group for people that are interested in Dynamo, at any level, offering a place to get together and discuss all things Dynamo.

The intersection of interior design, technology and the future of work

Having fun with Programming and BIM

A podcast sharing ideas and knowledge about the AEC industry

Your road map on the BIM journey

The BIM Avenger's Blog
Just shut up and do BIM

Tips, tricks and updates from the experts at Cadassist
The CASE for BIM

A collection of observations and opinions from myself and my friends around the world in relation to the Architecture, BIM, Sustainability, Technology & Learning in the AEC industry. There's no space here for 'old skool' thinking.

One man's dream to apply BIM and IOT to his smarthome

Design, technology, and exploration in a digital age.

All about Dynamo Nodes

A blog on BIM for Real Estate Owners, Developpers and Facility Managers

A collection of thoughts on BIM for Structural Engineers

Providing the CAD knowledge you need to succeed.

A podcast about BIM technology and techniques.

AEC, you and me.
Applying Technology to Architecture

Thoughts and ideas on supporting users in a design technology world

Obsolescence is the new extinction

BIM in landscape architecture [with a focus on Revit]